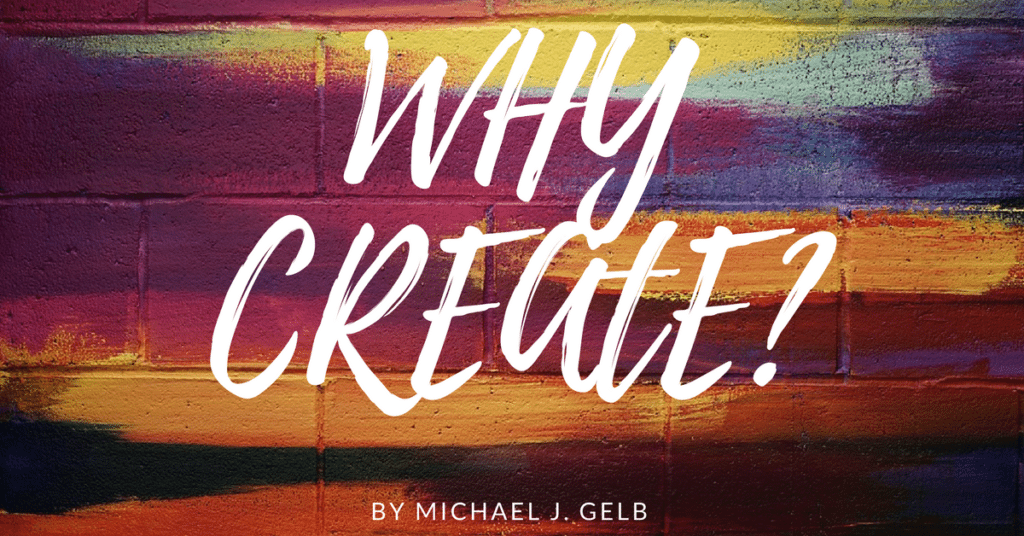 Today we take for granted the idea that creativity is a human attribute. The question “Why Create?” is predicated on the assumption that we have the option do so. But that assumption has only been around for about 500 years. Prior to the Renaissance, the notion of individual creativity didn’t exist, because the concept of individuality as we now understand it didn’t exist. Paintings, for example, remained unsigned, and painters, anonymous, because the individual was considered unimportant. All creative power was vested Above.

On a larger scale, great Gothic cathedrals like Chartres were the products of thousands of people toiling anonymously in collaborative efforts that continued over hundreds of years. The great cathedrals were deliberately designed to give the person who entered them an overwhelming feeling of insignificance in the presence of an omnipotent and omniscient Deity.

Individualism Recognized as a Value

A remarkable shift occurred during the Renaissance, when the power and potency of the individual began once again to be celebrated, as they had been in Greek and Roman times. In 1486, the Renaissance scholar and philosopher Pico della Mirandola offered his Oration on the Dignity of Man, heralding the shift from the medieval worldview, which disempowered the individual, to the revolutionary notion that we humans, unlike other creatures, have been placed at the very center of the universe, and blessed with powers of free will and creativity that are unlimited and virtually godlike.

Pico articulated the revolutionary notion that creativity is part of our expression of free will, part of what makes us uniquely human. He celebrates the notion that we create because we can. Leonardo da Vinci’s Vitruvian Man (a.k.a. “Canon of Proportion”) and Michelangelo’s “David” are the best-known symbols of this humanistic rebirth of individual creativity. But there is one man, Filippo Brunelleschi, who was the pre-eminent force in the emergence of the new human-centered worldview, for he both literally and figuratively created a new human-centered perspective. Just as the Gothic cathedrals had communicated a message about humanity’s place in the universe, Brunelleschi’s architecture sent an equally profound but very different message, as best exemplified by his dome for the Florence cathedral.

Standing beneath Brunelleschi’s heavenly dome, one feels oneself to be at the center of Creation. One does not feel overpowered and belittled, but exalted and uplifted in this sacred space. Humankind’s centrality and importance are also affirmed in Brunelleschi’s invention of three-dimensional perspective in art; which he taught to Massaccio, who produced the first Renaissance painting and to Donatello who created the first Renaissance sculpture. And Brunelleschi exemplified the new ethos in his own life by registering the world’s first patent for an invention (his remarkable ox-hoist) – patents being the legal and economic expression of the value placed on the individual’s intellectual capital.

Emergence of the Renaissance Man

Although Brunelleschi is the seminal force, Leonardo da Vinci reigns as the supreme expression of the “Renaissance Man” or “Uomo Universale” (Universal Man). DaVinci serves as a global archetype of individual creative possibility. In 1994 Bill Gates paid $30.8 million dollars for 18 pages of DaVinci’s notebooks. Why did Gates pay so much? Because he can! And, it’s easy to imagine that Gates recognizes that his own legacy resides in his role in the transformation from the Industrial Age to the Information Age; and that he wanted to associate himself and his brand with the works of a man who embodies the spirit of the dawn of that earlier new age.

The Renaissance, with its brilliant artists and architects, sculptors and scholars, taught us anew that creativity is our birthright, a gateway to our highest expression, the secret of individuation and personal fulfillment, and the secret of the art of living. Creativity may also be a means to earning a good living, as quite a number of artists discovered during the Renaissance. Before we explore the loftier motivations for creating let’s examine the relationship between creativity and profit.

The feudal system of the Middle Ages collapsed because, among other things, of the invention of the long-range cannon (built by a Hungarian engineer named Urban), which could blast through the walls of the feudal fortress. As fortress walls crumbled the printing press, magnetic compass, mechanical clock, microscope and telescope expanded European horizons exponentially. The technological breakthroughs that drove the transformation of the Middle Ages into the Renaissance were all made possible by the funding that became available as innovative accounting and banking systems evolved. Brunelleschi, Leonardo, Michelangelo, Raphael and all their fellow geniuses wouldn’t have created much of anything without the Renaissance equivalent of corporate sponsorship. If the Sforza, Medici and a succession of Popes hadn’t provided the capital, the Florence cathedral would’ve remained open to the elements and there would have been no “Last Supper,” “David” or “School of Athens.” As Professor Lisa Jardine author of Worldly Goods: A New History of the Renaissance emphasizes,

“…those impulses which today we disparage as ‘consumerism’ … occupy a respectable place in the characterization of the new Renaissance mind… A competitive urge to acquire was a precondition for the growth in production of lavishly expensive works of art. A painter’s reputation rested on his ability to arouse commercial interest in his works of art, not on some intrinsic criteria of intellectual worth.”

Those of us who “arouse commercial interest” through our creative endeavor — writers, photographers, creative directors, web designers, graphic artists, composers, painters and performers – are part of a great heritage of creating art for cash. As literary legend Dr. Samuel Johnson put it: “No man but a blockhead ever wrote, except for money.”

Capitalism provides the most energy and opportunity for creative expression. And the United States of America — founded on the remarkable idea that we are all created equal and have an inalienable right to “life, liberty and the pursuit of happiness” — is the greatest capitalist entity in history thus far. Our nation’s youthful optimism, diversity and emphasis on freedom and equality fosters an environment where creativity and innovation are more the cultural norm than anywhere else. Yet, as we transition out of the Industrial Age, and face unprecedented environmental, social and global challenges, the ability to think creatively becomes more urgent and important.

Historian of science George Sarton writes: “Since the growth of knowledge is the core of progress, the history of science ought to be the core of general history. Yet the main problems of life cannot be solved by men of science alone, or by artists and humanists: we need the cooperation of them all. “Sarton concludes that Leonardo’s “outstanding merit” is in his demonstration that “the pursuit of beauty and the pursuit of truth are not incompatible.”

For Leonardo, creativity was a function of the marriage of art and science. He emphasized, for example, that the ability of the artist to express the beauty of the human form is predicated on a study of the science of anatomy. But Leonardo’s science was also based on his art.

Leonardo urged his students to awaken the generative power of imagination in an unprecedented way. Offering “a new and speculative idea, which although it may seem trivial and almost laughable, is none the less of great value in quickening the spirit of invention.” He urged students to contemplate abstract forms – patterns of smoke, clouds, and swirls of mud – and to allow the imagination to run freely to discover in these mundane forms “the likeness of divine landscapes … and an infinity of things.” The Maestro then counsels that the ideas generated in this flight of the imagination “may then be reduced to their complete and proper forms.”

In the thousand years before DaVinci in Europe there was very little encouragement to “quicken the spirit of invention” by seeking “divine landscapes” or searching for “an infinity of things.” Before Leonardo the concept of “creativity” as a human function and an intellectual discipline didn’t exist. Inspired by Brunelleschi and Alberti, Leonardo effectively invented the modern discipline of “creative thinking.”

Just as Leonardo helped to invent the art of creative thinking he also points us toward a compelling reason to create: to know ourselves and the world around us – to appreciate truth and beauty — through mirroring the creative source. In his classic work The Creators: A History of Heroes of the Imagination, Daniel J. Boorstin addresses the mystery of the motivating forces of creativity. He notes, “the human need to create has transcended the powers of explanation.” Boorstin adds, “Peoples of ancient Egypt, Greece and Rome who did not know a Creator-God, who made something from nothing, still created works unexcelled of their kind. And peoples of the East who saw a cosmos of cycles created works of rare beauty in all the arts. Across the world, the urge to create needed no express reason and conquered all obstacles.” Boorstin summarizes the prologue of his journey through the history of Heroes of the Imagination, by proclaiming his intention to “describe the who, when, where, and what.” But, he concludes, “the why has never ceased to be a mystery.”

Of course, as Boorstin speculates, “Man’s power to make the new was the power to outlive himself in his creations.” In other words, for some, the motivation to create is to achieve immortality. And, of course, it isn’t necessary to posit or believe in God in order to create, but as Vincent van Gogh expressed it, “I can do very well without God in both my life and my painting but I cannot…do without something which is greater than I, which is my life, the power to create.”

The Chinese philosopher T’ang Hou reflects on the nature of the power – the “something greater” referenced by van Gogh: “Landscape painting is the essence of the shaping powers of Nature. Thus, through the vicissitudes of yin and yang – weather, time, and climate – the charm of inexhaustible transformation is unfailingly visible. If you yourself do not possess that grand wavelike vastness of mountain and valley within your heart and mind, you will be unable to capture it with ease in your painting.”

There is a creative force in the universe that we can all experience in our hearts and minds as a “grand wavelike vastness.” In creative endeavors we open ourselves to discover our harmony with “something greater” and, if we persevere, something true and beautiful just might emerge. As Ansel Adams expresses it, “Sometimes I do get to places just when God’s ready to have someone click the shutter.”

So “Why Create?” There are infinite reasons — to make visible the charm of inexhaustible transformation, to become more susceptible to grace, to achieve immortality, to know the mind of God, to manage change, make a living or make a life; but the simplest is: just because we can.

Don’t (re)engage with the humanities

About ten years ago the magazine of the U.S. Bureau of Labor Statistics published an article entitled “What Can I Do With My Liberal Arts Degree?” The article begins by asking a question that many parents have asked their children when they announced that they wanted... 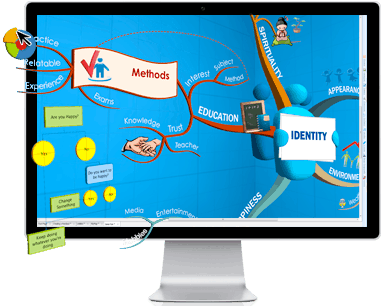